1. Romania could be a turntable to produce new electric bikes, light electric motorcycles and bike cars,  to be distributed in all Europe.
Bike production in Romania: 450.000 bikes were produced in Romania in 2012 ie 3,9% of the total UE production. In the production of bike components. Romania is on the third position in Europe after Italy and Germany, with sales of 200 million€ in 2012 ie 10% of

the total sales in UE.
In 2013 Bosch invested 77 million€ in Cluj-Napoca to produce engines for ebikes.
The DHS factory located in Deva, in 2014 had a turnover of 46 million€, exporting 70% of the production to the european market (UE).  E-bikes are 35% of the exports.
In 2013/2014 NextCity produced 2.000 bikes every day in a factory in Reşiţa for the French group Decathlon with 350 employees and will have in 2015, 950 more people working in the second factory in Haţeg.

complete e-bikes.  In 2014 in China were sold 30 million e-bikes, in certain cities 10% of the bikes are electric. Most of the world production of e-bikes is located in China, therefore most of the components must be imported from China, than can be assembled in Romania with low cost work force, to be distributed in all Europe. Certain Chinese producers can be attracted as investors, as partners in the construction of new factories here in Romania.

3. UE market protection. Forecasts. Bultaco was in the 70s the no.2 producer of motorcycles in Europe. Now they turned electric, they will produce only electric

motorcycles. Bulto officials and other market researchers are saying that in 15 years, 75% of the vehicles will be – not on gas/petrol. The transition to non electric will be faster for light vehicles with 2-3 wheels! See also the Organic Transit/Elf project. In a few years a large percentage of the new light motorcycles will be electric.
Things will turn on faster and faster as battery technology can increase energy efficiency year after year, as mass production will lower prices a lot. Lithium-ion storage capacity can increases by a factor of two every ten years. There was an improvement of 40% in only four years, between the release of the Tesla Roadster and the Tesla Model S.

4. Design of models for the European market. Stealth frames.
The first company to use this concept was Stealth from Autralia, the Stealth bikes are selling well in USA between 10k-14k USD. Similar models are produced now by Greyp-Rimac/Croatia, Qulbix/Slovenia, Vector/Ukraina-Germany,

Nyxbikes/Canada, Motoped/ USA at prices between 5k-7k euro. This concept is versatile, the frame can be used for:
3.1. pedalecs, electric bikes for city commuting or longer range travels  – with engines around 750w-1500w, up to 100-200km pedal assist range,
3.2. moto-bikes (mopeds) with 2-3kw engines, similar wih Bultaco Brinco , or 3.3. light motorcycles, electric enduro bikes.
One good frame can be used to develop a few models for city commuting, for short travels, for rural use, for off-road/bad roads. At the present day level of battery technology this concept is offering the best solution for cost effective, practical electric vehicles.

weight between 25-50 kg, will carry batteries with weight between 10-40 kg, to move payloads between 100-300 kg, on distances between 50-100 km (or up to 200 km in a few years). New technologies will be developed, using super-capacitors, progressive regen, sofisticated torque sensors, light materials (alu frames, fiber body,..), solar panels.. 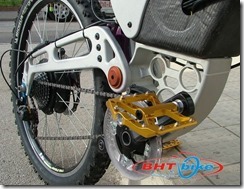 6. BHT Bikes, Torossian prototypes.
Mr. Torossian invested years of work, invested money in his prototypes, his design is art/haute couture, the best you can find worldwide. Here is a short presentation, follow please this link. His special designs are patented, now he is planning to start production. Such new models will be the future of new eco electric automotive industry. 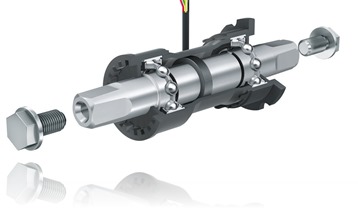