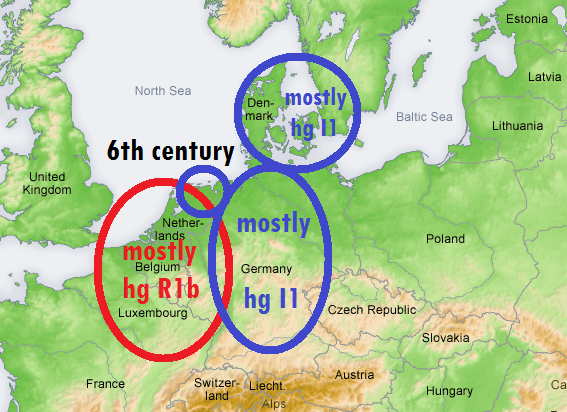 Haplogroup I1 (eupedia.com/Haplogroup_I1_Y-DNA) is the most common I subclade in northern Europe. It is found mostly in Scandinavia and Finland, where it typically represent over 35% of the male Y-chromosomes. Associated with the Norse ethnicity, I1 is found in all places invaded by ancient Germanic tribes and the Vikings. Other parts of Europe speaking Germanic languages come next in frequency.
Haplogroup I is the oldest major haplogroup in Europe and in all probability the only one that originated there. It is thought to have arrived from the Middle East as haplogroup IJ sometime between 45,000 and 50,000 years ago, and developed into haplogroup I approximately 40,000 years ago. The I1 branch is estimated to have split away from the rest of haplogroup I some 27,000 years ago. I1 is defined by over 300 unique mutations, which indicates that this lineage experienced a serious population bottleneck. Most of the Late Glacial and Mesolithic remains tested to date belonged to haplogroup I* or I2. It is not yet clear in which part of Europe I1 originated. It has been speculated that I1 evolved in isolation in Scandinavia during the late Upper Paleolithic and Mesolithic periods, when hunter-gatherers from southern Europe recolonised the northern half of the continent from their LGM refugia. The oldest attested evidence of postglacial resettlement of Scandinavia dates from 11,000 BCE with the appearance of the Ahrensburg culture.

The earliest sign of haplogroup I1 emerged from the testing of Early Neolithic Y-DNA from western Hungary (Szécsényi-Nagy et al. 2014). A single I1 sample was identified alongside a G2a2b sample, both from the early Linear Pottery (LBK) culture, which would later diffuse the new agricultural lifestyle to most of Poland, Germany and the Low Countries. This means that haplogroup I1 was present in central Europe at the time of the Neolithic expansion. It is therefore possible that I1 lineages were among the Mesolithic European hunter-gatherers assimilated by the wave of East Mediterranean Neolithic farmers (represented chiefly by Y-haplogroup G2a). There is also evidence from the Neolithic samples of the Early Neolithic Starčevo culture and Cardium Pottery cultures that haplogroup I2a lived alongside G2a farmers both in south-east and south-west Europe. The most likely hypothesis at present is that I1 and I2 lineages were dispersed around Europe during the Mesolithic, and that some branches prospered more than others thanks to an early adoption of agriculture upon contact with the Near Eastern farmers who were slowly making their way across the Balkans and the Mediterranean shores. The small group of farmers from the early LBK culture from Hungary might have formed a blend of I1 and G2a men. Yet distinct families would have spread in different directions and met varying successes in their expansion. It would appear that a founder effect in the northern LBK population led to a sudden explosion of I1 lineages, perhaps in part thanks to their better knowledge of the Central European terrain and fauna (since hunting was typically practised side by side to agriculture to complement the farmers’ diet). I1 would later have spread to Scandinavia from northern Germany.

This data is consistent with a Neolithic dispersal of I1 from Hungary with the LBK culture and the subsequent Funnelbeaker culture (4000-2700 BCE) in northern Germany and southern Scandinavia. Both the Funnelbeaker and Pitted Ware cultures represent a merger between the Neolithic (farming) and Mesolithic (hunter-gatherer) lifestyles. Neolithic farmers from Germany penetrated late into Scandinavia and in small numbers. There is archeological evidence that Neolithic farmers settled in southern Scandinavia and lived side by side with hunter-gatherers for several centuries during the Funnelbeaker culture. Scandinavian hunter-gatherers would have adopted the new Neolithic lifestyle little by little, using pottery and keeping domesticated animals (sheep, cattle, pigs and goats) to complement their traditional diet of fishing and game hunting. The cultivation of wheat, barley and legumes was fairly limited due to the cold climate. The cold climate was actually a barrier to the expansion of farmers from the continent. This is why Scandinavians retained a greater percentage of Mesolithic ancestry than virtually all other Europeans, apart from the Samis, Finns, Balts and Russians. No ancient Y-DNA from the Funnelbeaker culture in Scandinavia has been tested to date, but it is likely that I1 really started gathering momentum toward the end of the Funnelbeaker period. It might also have been among the Funnelbeaker lineages that were most successfully assimilated by Proto-Indo-European invaders during the Corded Ware culture (aka Battle-Axe culture in Scandinavia). Most I1 individuals today share a common ancestor around the time of the transition between the Funnelbeaker and Corded Ware periods.
From 2800 BCE, a large-scale cultural and genetic upheaval hit Scandinavia with the arrival of the Indo-Europeans from Eastern Europe, who introduced the Copper Age and Early Bronze Age practically without Neolithic transition. The first Indo-Europeans to reach Scandinavia were the Corded Ware people from modern Russia, Belarus and Poland, who are thought to have belonged predominantly to haplogroup R1a. These people shared some similar maternal lineages as Scandinavian I1 inhabitants, including mtDNA haplogroups U2e, U4 and U5, but also brought many new lineages such as H2a1, H6, W and various subclades of I, J, K and T. The second major Indo-European migration to Scandinavia was that of haplogroup R1b, the branch that is thought to have introduced Proto-Germanic languages, as an offshoot of the Proto-Celto-Germanic speakers from Central Europe. R1b probably entered Scandinavia from present-day Germany as a northward expansion of the late Unetice culture (2300-1600 BCE). The oldest known R1b sample in Scandinvia dates from the Nordic Bronze Age circa 1400 BCE (see Allentoft 2015 above). According to the Germanic substrate hypothesis, first proposed by Sigmund Feist in 1932, Proto-Germanic was a hybrid language mixing Indo-European (R1b, and to a lower extent R1a) and pre-Indo-European (Mesolithic I2 and Neolithic G2a and I1) elements. This hybridisation would have taken place during the Bronze Age and given birth to the first Proto-Germanic civilization, the Nordic Bronze Age (1700-500 BCE).
The Germanic migrations dispersed I1 lineages to Britain (Anglo-Saxons), Belgium (Franks, Saxons), France (Franks, Visigoths and Burgundians), South Germany (Franks, Alamanni, Suebi, Marcomanni, Thuringii and others), Switzerland (Alamanni, Suebi, Burgundians), Iberia (Visigoths, Suebi and Vandals), Italy (Goths, Vandals, Lombards), Austria and Slovenia (Ostrogoths, Lombards, Bavarians), Ukraine and Moldova (Goths), as well as around Hungary and northern Serbia (Gepids). The I1 found among the Poles (6%), Czechs (11%), Slovaks (6%) and Hungarians (8%) is also the result of centuries of influence from their German and Austrian neighbours. The relativelemy high frequency of I1 around Serbia and western Bulgaria (5% to 10%) could be owed to the Goths who settled in the Eastern Roman Empire in the 3rd and 4th centuries.
The Danish and Norwegian Vikings brought more I1 to Britain, Ireland, the Isle of Man, Normandy, Flanders, Iberia, Sicily… The Swedish Vikings (Varangians) set up colonies in Russia and Ukraine, and outposts as far as the Byzantine Empire, the Caucasus and Persia. The higher frequency of I1 in Northwest Russia (east of the Baltic) hints at had a particularly strong Varangian presence, which is concordant with the establishment of the Kievan Rus’ by the Swedes.
All Germanic tribes expanded from a small geographic core around Denmark and southern Sweden within the last 2500 years. 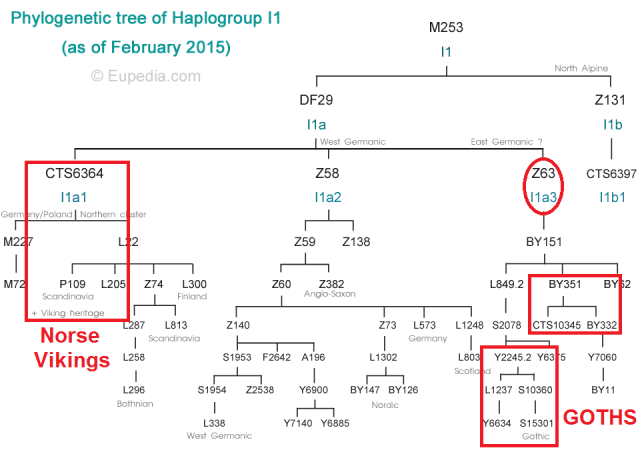 I1-Z63> By151> S2078> S10360> S15301 Gothic. The German group, is the most common type of I1 in Germany, France, Italy and Central Europe, but is also found in the British Isles and to a lower extent in Scandinavia. It is defined by a DYS456 value inferior to 15. It corresponds to the Z63+ subclade. Z63+ subclade is virtually absent from Nordic countries. It is most common in Central Germany, the Benelux, England, Lowland Scotland, as well as Poland. It has also been found in Russia, Ukraine, the Balkans, Italy, Spain and Portugal. Y2245.2+ makes up a big part of the Z63 in Russia, Ukraine, Poland, the Balkans, Italy and Iberia. It could have been spread by the Goths. BY351+ is a subclade found in Portugal, Spain, Italy (including Sardinia). It was probably spread by the Visigoths and Ostrogoths.

I2 (M438/P215/S31) is thought to have originated during the Late Paleolithic, around the time of the Last Glacial Maximum (LGM), which lasted approximately from 26,500 to 19,000 years ago. Haplogroup I2a1 is by far the largest branch of I2 and the one most strongly linked to Neolithic cultures in south-east, south-west and north-west Europe. I2a1 seems to have particularly prospered in the Starčevo–Kőrös–Criş culture (6000-4500 BCE) in Southeast Europe, where it is still one of the main male lineages today. The high concentration of I2a1b-L621 in north-east Romania, Moldova and central Ukraine reminds of the maximum spread of the Cucuteni-Trypillian culture (4800-3000 BCE). No Y-DNA sample from this culture has been tested to date, but as it evolved as an offshoot from the Starčevo–Kőrös–Criş culture, it is likely that I2a was one of its main paternal lineages. From 3500 BCE, at the onset of the Yamna period in the Pontic-Caspian Steppe, the Cucuteni-Trypillian people started expanding east into the steppe of what is now western Ukraine, leaving their towns (the largest in the world at the time), and adopting an increasingly nomadic lifestyle like their Yamna neighbours.

2364 is the largest and most diversified I2a2 subclade. It has the widest distribution of any subclade. It is found in all Germanic countries, including Britain, but also Ireland, the Czech Republic, Hungary, Poland, Latvia, Russia, Ukraine, Bulgaria, Italy, France, Spain and Portugal. This suggests that it could have been propagated by the Franks, Anglo-Saxons, Goths and Vikings, among others. S2364 originated nearly 4,000 years ago, but its numerous subclades developed between 1,000 and 3,000 years ago, which matches the time frame of the Germanic ethnogenesis and Germanic migrations.

The I2a1 tribal haplotype that I have identified has remained relatively unchanged for thousands of years and has allowed me to follow a migration in and out of Asia and across Europe.  I cannot say that I have found the DNA of all the Alans or that the Alans were only haplogroup I2a.  The correlations that I have made are based on records currently available and it is impossible to say what additional future DNA records may reveal. 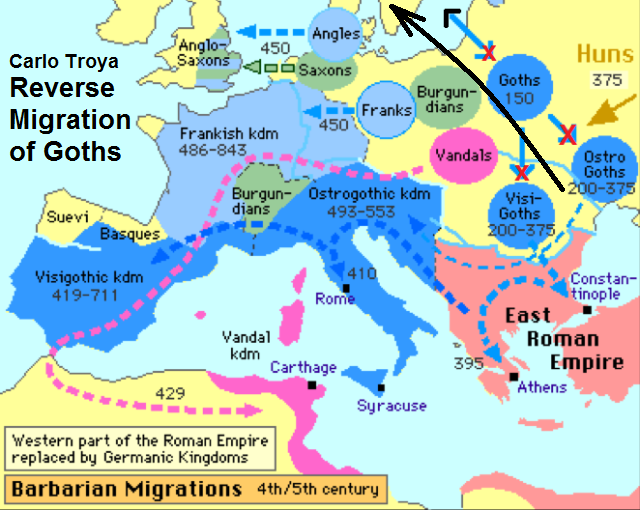 I1a3 / Z63+ is associated with Goths, but this subclade is virtually absent from Nordic countries. That is consistent with the theory that Goth spread from Danube Carpathian basin / N of Black Sea to Scandinavia, idea started by Carlo Troya. It is also consistent with the constant flow of population from areas where there were better living conditions to colder areas in the North. After the last Ice Age Europe was recolonised by I people from Old Europe. Also through the Balkans and Danube basin agriculture went North. Here it was the surplus of population that overflowed to less populated areas.