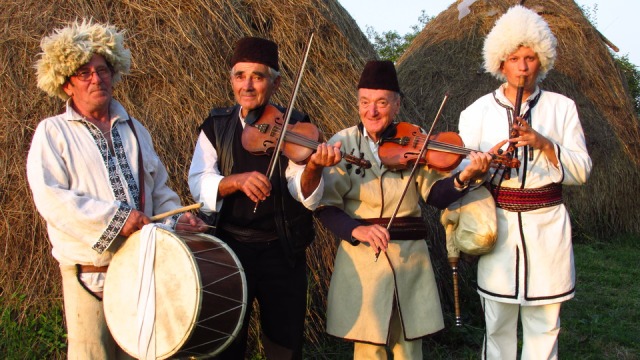 wikipedia: It is generally accepted today, that the Roman army introduced their bagpipe, the Tibia Utricularis, to the British Isles. The original pipes in Scotland probably had, at the most, a single drone. The second drone was added to the pipes in the mid to late 1500s. The Oxford History of Music says that a sculpture of bagpipes has been found on a Hittite slab at Euyuk in the Middle East, dated to 1000 BC. Several authors identify the ancient Greek askaulos (ἀσκός askos – wine-skin, αὐλός aulos – reed pipe) with the bagpipe.[2] In the 2nd century AD, Suetonius described the Roman emperor Nero as a player of the tibia utricularis. The third, or the great drone, came into use sometime in the early 1700s. In the Bible book of Daniel, written more than 500 years before the birth of Jesus Christ, six Babylonian musical instruments are specifically mentioned. (Daniel 3:5, 10, 15) Included in this list is the Aramaic word sum·pon·yahʹ, rendered “bagpipe” in many Bible translations.

A Highland regiment never marched without a piper. The bagpipe was the instrument of the Roman infantry while the trumpet was used by the cavalry. Most Roman musical instruments came originally from Greece, and it seems the tibia utricularis was no exception. In his 425 BC play The Archarnians, Aristophanes (apparently) references a bagpipe-like instrument. The first to march to the reed pipes were the Lacedaemonians or Spartans. They were the first to use a drum with the pipes and the first to have massed pipers playing the same tune and it seems the first to match their pipes to reduce 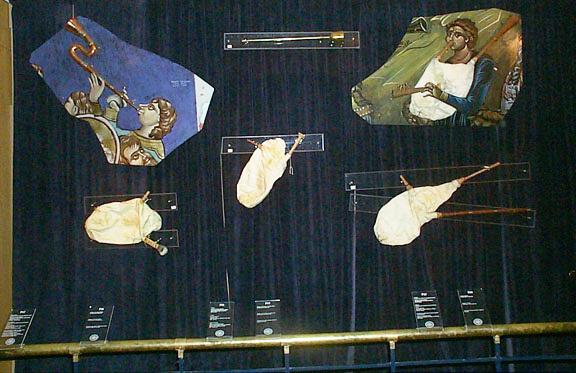 discordance. Thucydides advises that ‘they advance slowly to the music of many pipe players which were stationed at regular intervals throughout the ranks, marching together rhythmically, that their ranks might not be broken.’ Aristotle advises that ‘it was their custom of entering battle to the music of pipe players which was adopted in order to make the fearlessness and ardour of the soldiers more evident’. This achieved a strict rhythmical advance. Plutarch advises that the ‘Spartans marched when going into battle, the pipers playing the tune called ‘The Hymn of Castor”, marching on to the tune of their pipers without any disorder in their ranks, moving with the music‘.

This stone carving, from a throne room in the Assyrian palace in Nimrud (the British Museum) dates to about 800 B.C. The warrior is assisted by a “skin-float,” probably a goat-hide. The bag is equipped with a blow-pipe through which the swimmer can replace air that has leaked. Tie a simple reed-pipe into this device and Presto!, we have a bagpipe.

The status of the ancient world piper was held in great esteem as judged by the grave of the piper in the Royal Sumerian Cemetery at Ur and the ancient Greek statue erected to Phronomus, (the inventor of the ring stops.) Aside from his silver pipes, the Ur piper had the greatest number of offerings, more than any other burial in the cemetery. During the last thousand years B.C. double pipes were known and played all over the old world of the Near and Middle East. The divergent type was to prove more popular than the parallel type according to archeological finds which show them more numerous. From Ur in Sumeria, the divergent double pipes can be traced right up through Mesopotamia and Arabia, to the Eastern Mediterranean and the countries of Israel and Phoenicia, to Troy and the Hellespont, right to Greece and Rome. The divergent reed pipes were supreme in the ancient world. The literature of both Greece and Rome indicate that the pipes were one of the facets of everyday life in both countries. The chain of development seems to have been Sumeria, Egypt, Phrygia, Lydia, Phoenicia, Greece, Rome and Rome’s colonies. It is with the Emperor Nero, in the first century A.D. that we have the first definite mention of the bag applied to reed pipes. Gaita is a generic term for “bagpipe” in Castilian (Spanish), Portuguese, Basque, Asturian-Leonese, Galician, Catalan and Aragonese, for distinct bagpipes used across the northern regions of Spain and Portugal and in the Balearic Islands. In the south of Spain and Portugal, the term is applied to a number of other woodwind instruments. Just like the term “Northumbrian smallpipes” or “Great Highland bagpipes”, each region attributes its toponym to the respective gaita name. Most of them have a conical chanter with a partial second octave, obtained by overblowing. Folk groups playing these instruments have become popular in recent years, and pipe bands have been formed in some traditions. A piper with his gaita sanabresa 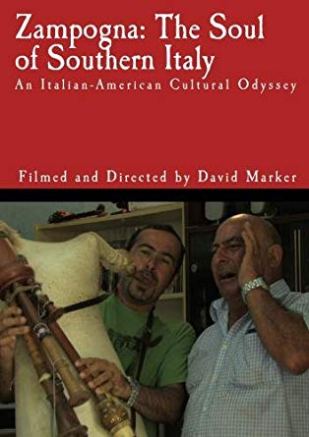 All bags for these types a bagpipes are made usually from the entire skin of a goat or sheep. The use of donkeyskin has also been reported in the past.. 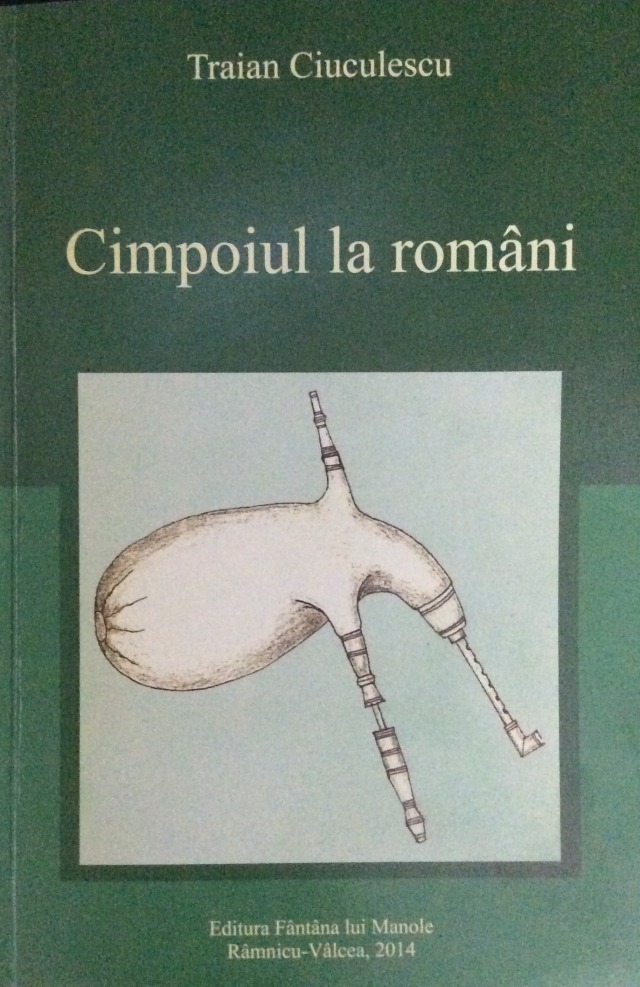 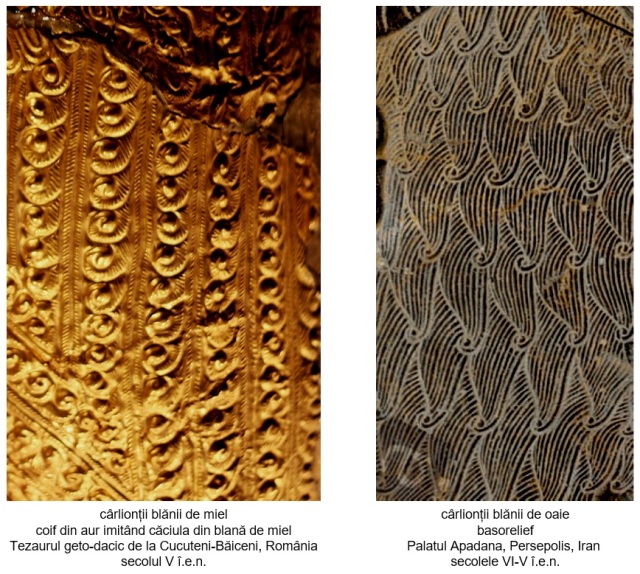 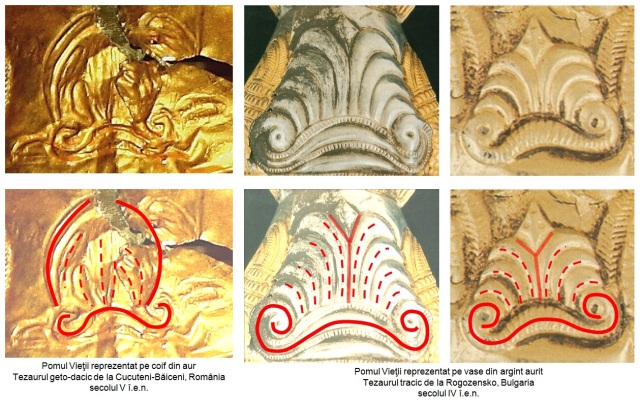 The bagpipe (and the woolen dacian hats) are clearly related to sheep breeding, so the Romans take the bagpipe from greeks than take this instrument to the British Islands.

But both macedonians/thracians/R1A and dorians/R1b came to “Greece” over “dacian” territories. And Timoc are is a very conservative area, where very old “vlach” traditions are still alive.  From all european people the Vlach people are mostly associated with sheep breeding and transhumance.